Chanterelle mushrooms are also known as egg mushrooms or golden chanterelle. They are loved by the cooks from the entire world, and they can be found in many places across the globe. They differ from one to another depending from which part of the Earth they come from.

They usually vary in size, where the ones from Europe and Asia are the size of a thumb, in the eastern US they are much bigger, growing to a size of a fist. The largest ones are found in the western US, where they reach the size of two hands!

There are some claims that European chanterelles are tastier than the ones from the west coast, and you are free to try all of them! Here’s how to cook chanterelles, the best way! 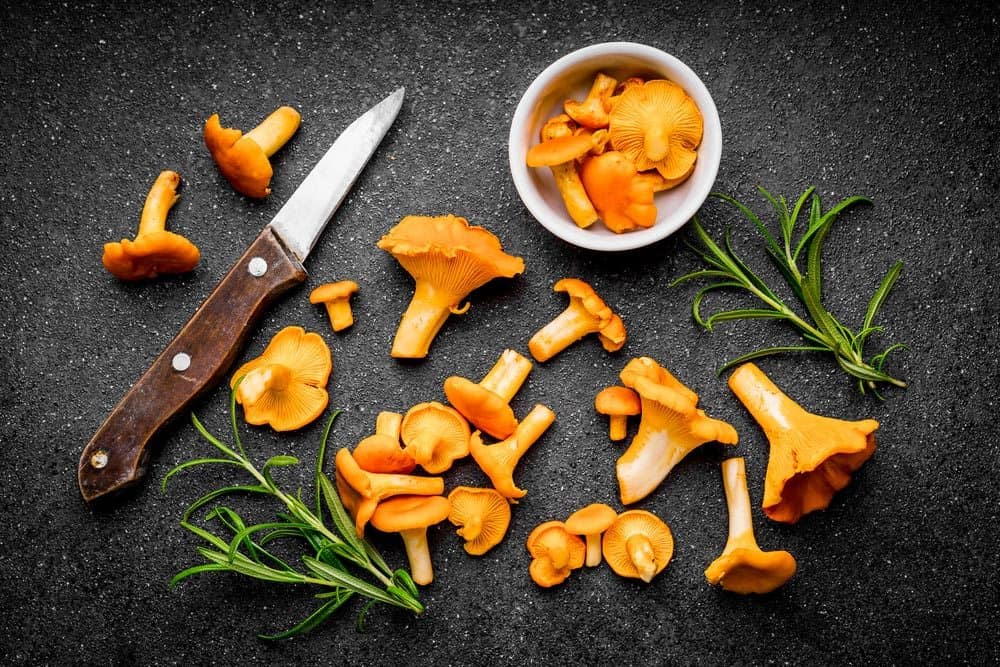 The preparing process of chanterelles can be a tricky task. They got a lot of sand and dirt on them, so they require a proper cleaning. To remove all the surface material, you can try to use a toothbrush and to remove smaller particles of dirt, run the mushrooms under the faucet. But don’t soak them in water completely, the less water you manage you use, the better.

After you gave them a minor bath, place them on paper towels to drain and dry. Once they were cleaned, they can stay in the refrigerator for a few days. The proper way to store them is to put them in a bowl layered and covered with paper towels. 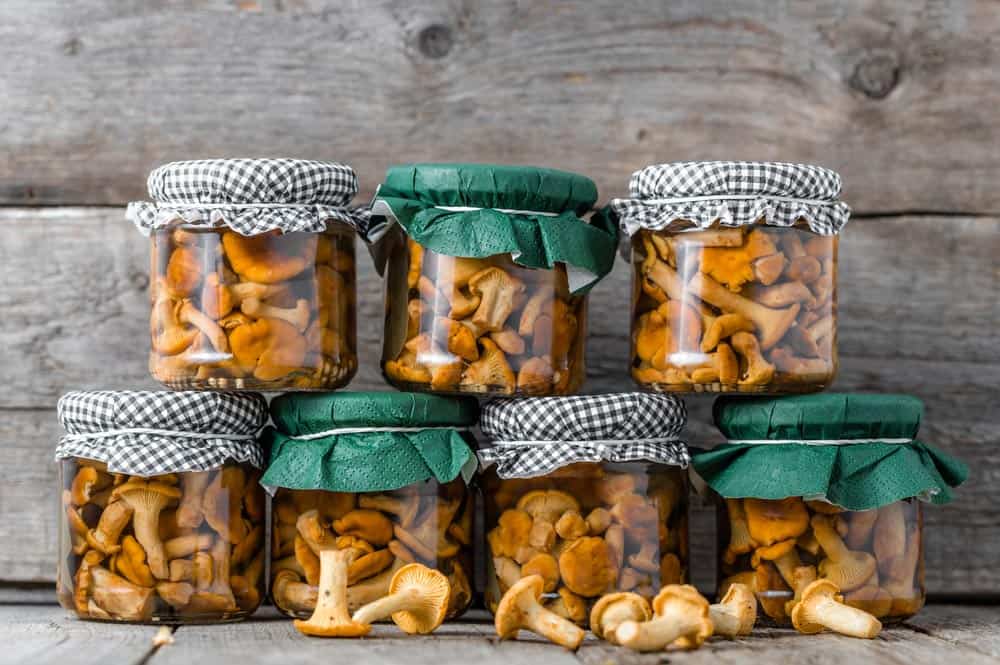 Chanterelles can be frozen, if they are quickly fried in a small amount of butter with onions, they will preserve most of the flavor. Dried ones lose their flavor and the texture, making them rubbery. The best way to preserve them is just like any other mushrooms by canning them. They have to be cleaned and cut into large pieces, then steamed for around twenty minutes.

Put the pieces in small jars and fill them with the liquid in which they were steamed. Add a half of a spoon of vinegar and salt to the mix and sterilize them for around forty minutes at ten pounds of pressure in a pressure cooker. You can pickle them with spices such is oil, soy sauce, etc. 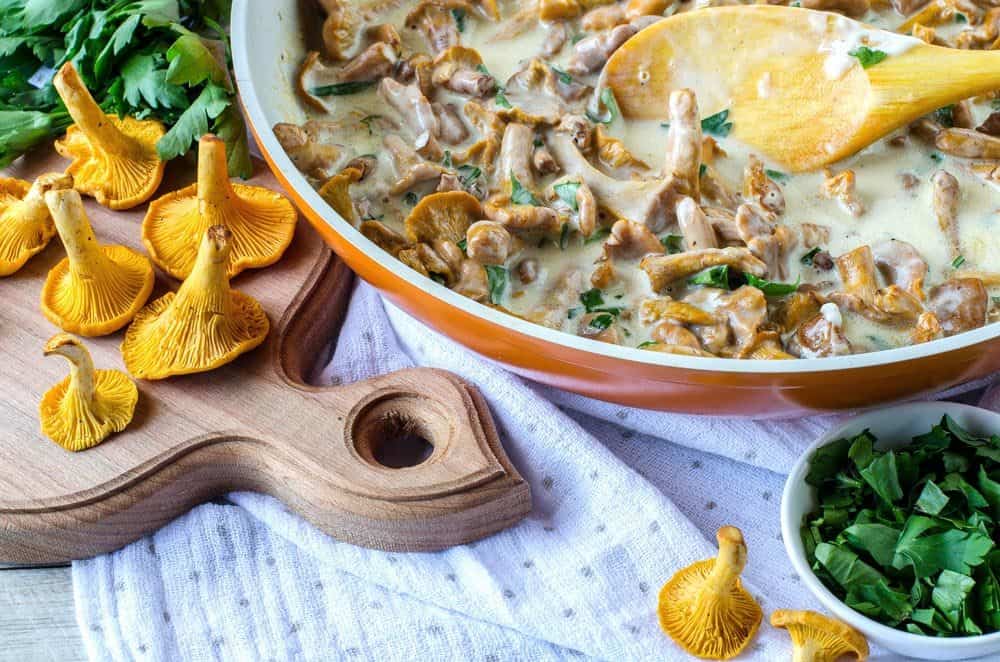 To cook chanterelles, first cut them into big pieces, that way they will preserve the flavor. They are meaty by default, and the best way to cook chanterelles is to slice them up and fry them in butter. You can use some of the additions that go well with them, like cream or chicken broth. They retain their flavor even after long cooking, and they bake very well too. Chanterelles can be a great side dish to eggs, pork, chicken, and veal.

We tried all the different types of cooking, and we got to say that they taste the best when they are baked in chicken broth with onions. The mix can go marvelously with pasta or rice. Many other vegetables like potatoes, for example, will overpower their flavor. We don’t recommend that you eat them raw, not only they don’t taste that good, they can even make you sick, make sure that you cooked them throughout before consuming.

Chanterelles can be cooked as a side dish or as a part of the main course. You let your imagination run wild and add them to a lot of different foods. But, to get you started, here are some recipes that we think you will fall in love with: 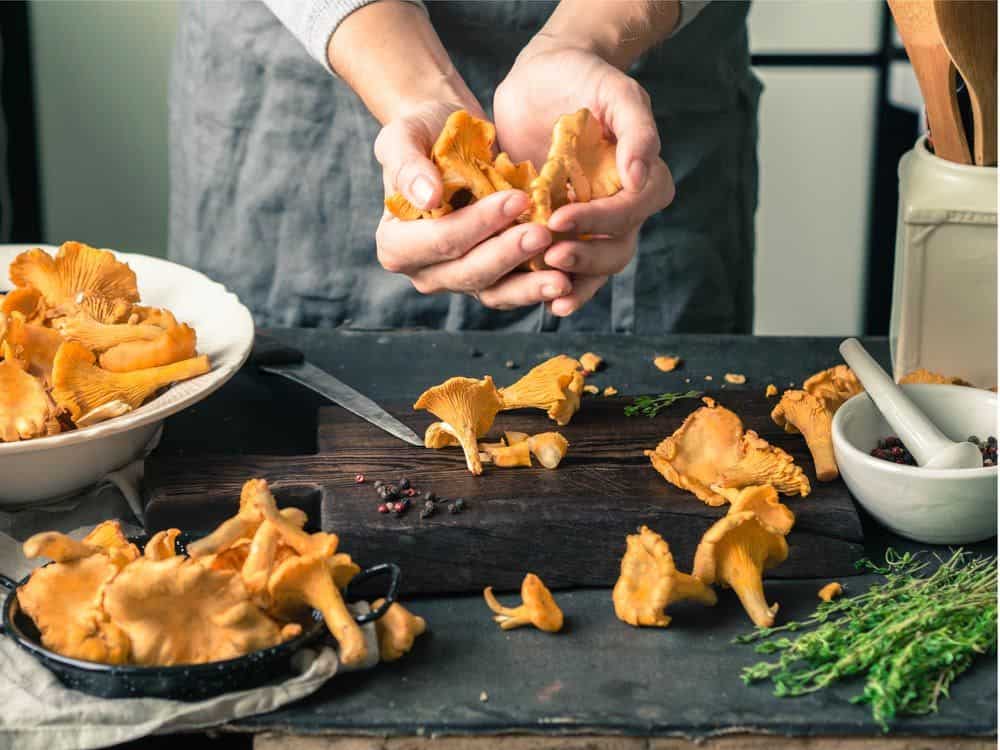 You can use the marinated chanterelles as an appetizer, or you can heat them up, drain them and serve them with pasta.

• Heat the oil in a skillet until it becomes hot, then add the mushrooms. Let them fry for 3-5 minutes.
• Take all the ingredients for the marinade and mix them together.
• Add the mushrooms with the oil from the pan to the mix.
• Refrigerate them for around four hours.

They should be good for two weeks in the fridge for consuming.

The puffs are a great food for parties; you can serve them with Riesling or any other white wine.

• Take a medium-size heavy saucepan and heat the chicken broth.
• Add the mushrooms, salt, and butter and let it come to the boiling point.
• Add the flour while constantly mixing until the mix is smooth.
• Remove the saucepan from the heat and add eggs to the mix one at a time.
• Place the dough in tablespoon-sized pieces on the buttered cookie sheet, giving each spoonful at least two inches of space between them.
• Preheat the oven to 450 degrees.
• Bake the puffs for 15 minutes.
• Cool the puffs and serve them.

This dish is great served with fried oysters and cabbage salad.

• 4 slices of bacon, cut into small pieces
• 1 pound of chanterelles
• 1 diced medium sized onion
• 1 or 2 tablespoons of sour or sweet cream
• Salt and pepper according to taste

• Fry the bacon crisp.
• Leave the bacon in the pan, but reduce the fat, leave just 2 tablespoons.
• Take a large size saucepan, add the chanterelles and cover them with water.
• Let them come to a boiling point and then drain them throughout.
• Add the onion and the chanterelles to the bacon.
• Cook over low heat for around 10 minutes.
• Add the salt and pepper according to your taste.
• Before the serving add the cream.

Prawns and Chanterelles in Cream

This meal is such fine blend of flavors that you just have to give it a try. It can be served as a soup or over brown rice or pasta as the main course.

• Take a skillet and sauté the mushrooms in the butter until it evaporates completely. Set them aside.
• Make a mix of flour, pepper, and salt and dust the prawns.
• Take a sauté pan and heat the olive oil in it.
• Sauté the prawns until they turn pink.
• Drain them on a couple of paper towels.
• Take a saucepan and put the Dubonnet, lemon juice, green onions, wine and cream in it.
• Heat slowly for around five minutes.
• Don’t let the mixture boil.
• Remove from the heat source and mix with prawns and chanterelles.
• Garnish the whole mixture with Parmesan cheese and parsley.

By now you must have tried some mushrooms combined with chicken, it’s a natural blend almost. The goal here is to cut the breasts in the small pieces and chanterelles are sautéed and served with the chicken.

• Get a large saucepan and put garlic, wine, parsley, and bay leaf in it and bring it to simmer.
• Add the chicken to the saucepan, cover it and cook it until the chicken is tender; it usually takes around 15 minutes.
• When the chicken cools off a bit, remove it and chop it into small pieces.
• Strain the liquid left into a medium size saucepan.
• Get a sauté pan and sauté the mushrooms in the butter until they are nice and tender.
• Drain the liquid from the chanterelles and pour it into the poaching liquid.
• Cook the mix until it starts to thicken.
• Add the chicken, shallots, pine nuts and chanterelles into the liquid and cook it for 10 minutes without the cover.
• In the end, add the salt, pepper, and parsley.

No matter which way you want to cook chanterelles, it’s important how you prepare them. Keeping them dry as much as possible is very important.

They contain a lot of liquid in themselves which is released when they are cooking. We hope that we helped you make a tasty mushroom dish and that now you have a better idea how to cook chanterelles for you and your guests.