There’s something about soups; we mean good, homemade soups. When you combine a bunch of ingredients in a large pot, cover them with water and let them simmer, a certain magic starts to happen. Spectacular flavors get released and formed due to this mixture of different elements, and we love to say that soup is truly a dish with a soul.

Now, what are soups good for? To be served as an appetizer? Sure, that’s a good way of enjoying them. However, they show their true value and purpose when in need of something to get you out of your blue mood or help you recover from a cold.

Now, in this article, we will be visiting Latin America again and our dish of the day is caldo de pollo. This is a hearty and delicious chicken and vegetable soup popular In Mexico and many South American countries. In our work, we’ve encountered so-called “soup lovers” who have never even heard of this heavenly meal, so we decided to educate the culinary enthusiasts and shed some light on how to make caldo de pollo. Get your pots out and let’s get started. 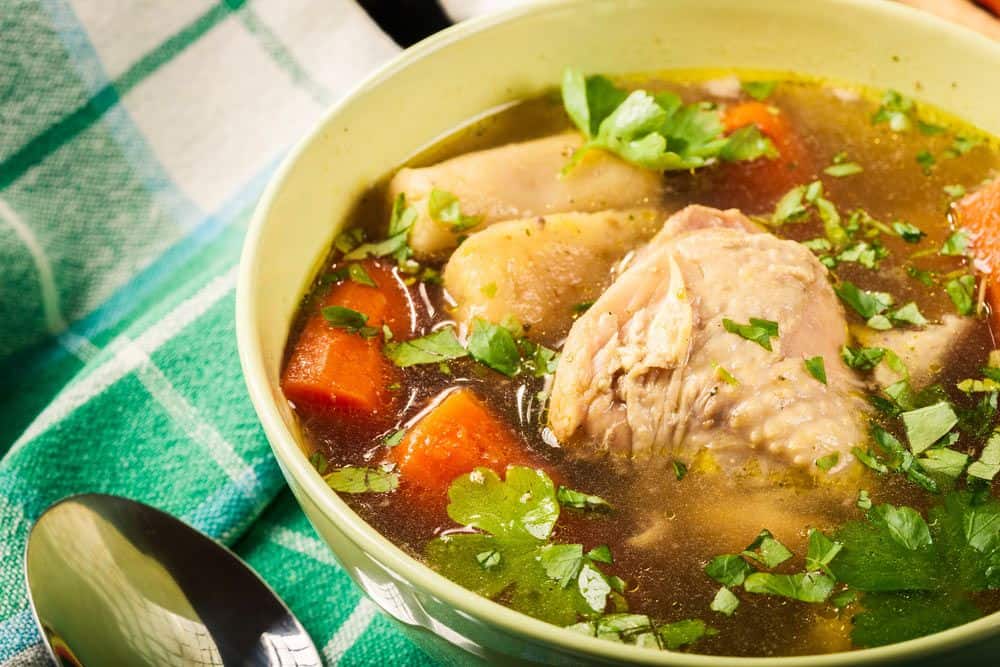 “What exactly is caldo de pollo?” you might ask. Caldo means “broth,” while pollo stands for “chicken,” thus this meal translates to simply chicken broth. It’s not only broth, of course, but it is also a full-blown soup packed with meat, veggies, and spices. This recipe originated in Mexico, and from there it spread to many South American countries as well as the Mexican-populated areas in the US. If you happen to come across “sopa de caldo” know that it is pretty much the same meal, it only uses the word soup (sopa) instead of the word broth.

While the Mexican version of this food is very hearty and satiating, some other regions prefer to eat a lighter variety of this meal. All across the Spanish speaking world, caldo de pollo is used as a cure for the cold or is served to women after they give birth.

For most people, chicken soup is not something extravagant or exotic, right? So, what separates caldo de pollo from your plain old soup? The ingredients are quite ordinary – potatoes, carrots, onions, chicken, etc. but, the way they are cut and prepared makes all the difference.

When making this meal one does not shred the chicken into small cubes but rather throws in whole pieces like legs, wings, or breasts into the pot. Also, the vegetables are not finely chopped; for example, potatoes are halved, not cubed, and whole cabbage leaves are used. Generally, all the vegetables are of a heartier cut. 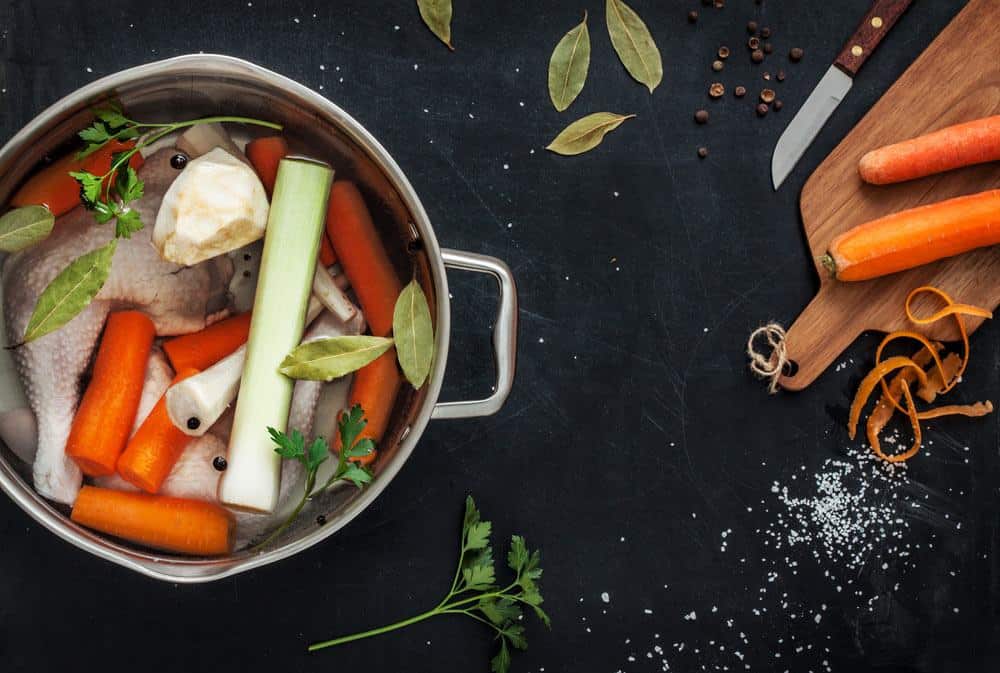 In the northern hemisphere of planet Earth it is autumn right now, and in just a few weeks winter will knock on our doors. Chilly weather brings certain illnesses such as the common cold, so to fight this we are providing you with an easy caldo de pollo recipe that you can prepare at home.

Of course, you don’t have to be sick to eat it; this meal is healthy, filling, soul-nourishing, and cheap as chips to make. We suggest making it in bulk, and if it’s too much to eat right away, freeze it in some plastic containers and consume when you feel like it.

1. Pour the water into a large pot and add chicken and salt. Peel and chop garlic and add it to the pot. Bring to a boil and leave it on high heat for 15 minutes.

2. In a separate pan heat up the olive oil over medium heat. Peel and chop onion and tomatoes. When the oil is hot add the onion and let it cook until it becomes translucent. Make sure that you keep stirring it not to burn. After, add the tomatoes and cook for another 3 minutes.

3. After the onion and tomato mixture is done, add it to the soup pot.

4. Wash the potatoes (you can peel them if you want, but it is not necessary), and chop them into halves or big chunks. Chop celery and carrots and add them to the pot along with the potatoes.

5. Bring the soup to a boil and let it simmer for about 20-30 minutes. Essentially it needs to cook until the vegetables are done.

6. In the final 5 minutes of cooking add the tomato sauce and stir it in. 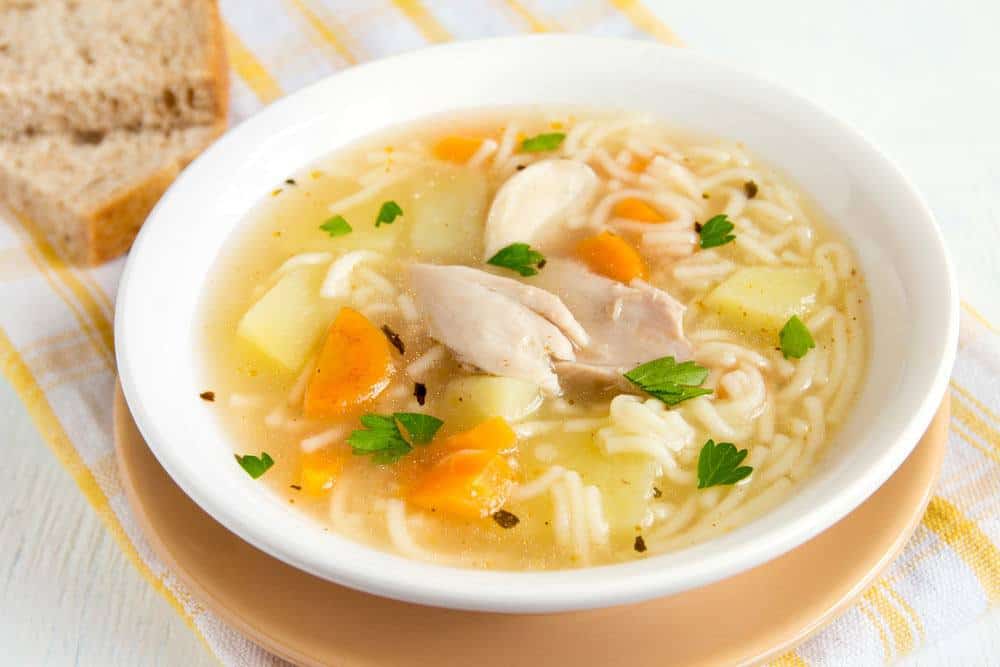 When choosing a vehicle for caldo de pollo, we suggest that you go for the bowl since this is the traditional way. Make sure that every serving includes a piece of meat because chicken is the essence of this meal.

Now, when it comes to taste, there are a few variations. People who like to have a little “zing” usually squeeze juice from a lemon or lime wedge into the bowl. This will not make the soup sour but rather give it a note of freshness.

Those who like to spice things up can add a few drops of hot sauce into the soup, and if you are not a fan of strong flavors, then you can just eat it plain.

As far as the sides are concerned, caldo de pollo is commonly eaten with warm corn tortillas. In Mexico, it is not unusual to have the soup with some steamed Spanish rice which is usually placed in the same bowl. Some people also add cubed avocado to enrich the taste even more.

Freezing And Refrigerating The Soup 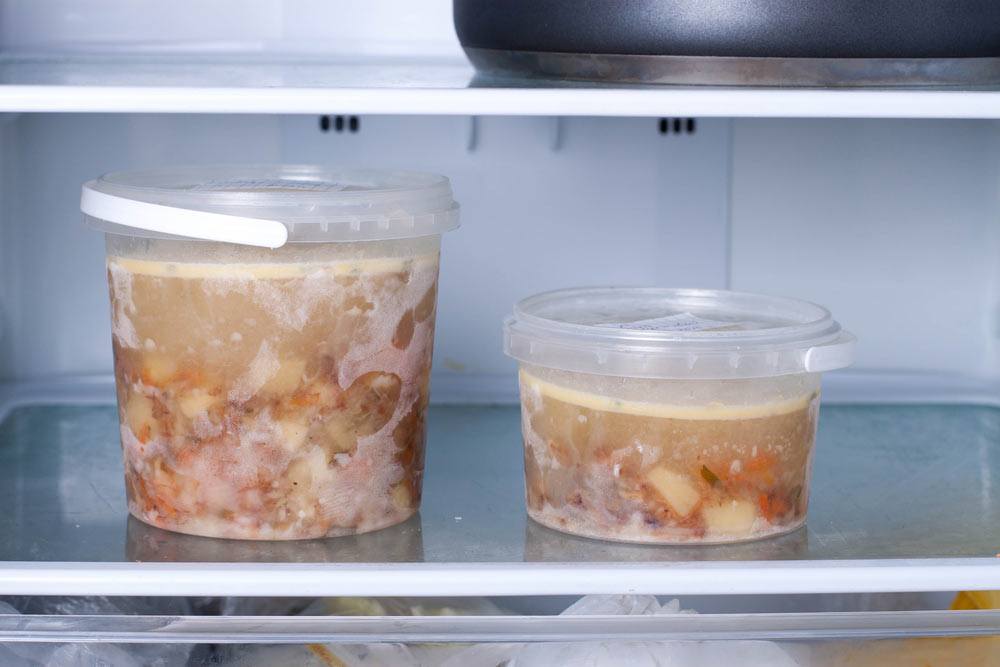 The recipe we presented you with is enough to feed 4-6 people, so we imagine that not everyone has a hungry crowd in their home and that some folks will be left with some extra soup. In this case, freezing or refrigerating it are two absolutely viable options.

If properly stored in the fridge, the soup will be able to last for 3-4 days. If you wish to store it in
this way and maximize the soups shelf life, here are some things that you need to know:

Reheat it in a microwave or on low heat before serving.

Now, if you don’t plan to eat the soup within the next few days, the best idea might be to freeze it. If you store it well, it will be able to last for about 4-6 months retaining a great quality. The soup will not go bad even after 6 months, but it will just not be as delicious. Similar to refrigerating, store the soup in covered, airtight containers or heavy-duty freezer bags and thaw when you wish to eat them.

If the frozen soup thaws by itself at room temperature it should be able to last for another 3-4 days in the refrigerator. However, if you thaw it in a microwave, it should be eaten right away.

How to know if the soup has gone bad

Just use common sense and basic knowledge. If the soup has a bad odor, a strange taste, or if mold has appeared, then it is the best idea to throw it away.

Caldo de pollo is a many-splendored thing because of its deliciousness as well as healing and comforting properties. Also, it can be frozen and stored then thawed and eaten whenever you wish, making it a healthy kind of “fast food.” Even if you are not the greatest cook and the idea of making soup from scratch intimidates you, we advise you to go where the fear is.

By doing this, you will realize that this dish is simpler to prepare than you thought and it could easily become one of your go-to meals for when you crave some soul food. Moms or anyone who has to cook for a family knows the benefit of make large amounts of food in a relatively short period, and caldo de pollo provides you with just that.